What Kind of Impact Can 25 Yards of Water Have on a Community?

Let’s start with an idiom I’m sure you’ve heard before. “The best things come in small packages.” Meaning? Often things that have the most value are quite small. Put another way; the size of something does not always properly indicate its value.

For example, can we convince you that a 25 yard, 5-lane pool might be more valuable to a community than a 50-meter pool with 10 lanes? Granted, V3’s 50-meter pool, which will be used at the US Olympic Trials in Omaha this summer, will be a world-class training vessel and host countless top-notch events that will provide enormous economic impact in North Minneapolis.

“The reality is the small pool, the instructional pool, is usually the more important of any two-pool system because it’s the one that keeps people coming in for lessons, for therapy, you know, there are a variety of uses there,” Aaron Gabriel explained.

Not only will the instructional pool provide hydrotherapy opportunities for adults, it’ll be a place where both children and adults can learn to swim. Studies show when parents learn to swim, they embolden and inspire their children to learn as well.

Gabriel represents Myrtha Pools, the manufacturer of both V3’s 50-meter and 25-yard pools. Years ago, he was close to making the US Olympic Swim Team competing in a 50-meter facility, yet he’ll argue that the smaller, instructional pool will have a bigger, bolder community impact. It’s where we’ll save countless lives. It’s why V3 will break ground and build the 25-yarder, and the building surrounding it, first. A big pool will probably be busy a lot of the time, but the instructional pool will be busy all of the time.

Analyah Schlaeger dos Santos, a former V3 athlete, current expert in environmental justice and longtime swim instructor, will make sure of it.

And while access presents a big barrier and remains a significant reason why disturbing drowning disparities currently exist, long-standing and generational fear of water remains a key factor as well.

“If you can put yourself into a position where you’re not their therapist, but you’re helping them use a physical skill to connect to their mental well-being and state of mind,” said Schlaeger dos Santos. “Swimming should be a relaxing thing. A safe space. But if it’s a toddler or somebody who’s an elder, it’s a whole different conversation.”

Determining why disparities in swimming abilities exist has led Dr. Carol Irwin of the University of Memphis into hundreds of conversations. For more than ten years, Irwin has been gathering and studying swimming disparity data from urban centers throughout the country, on behalf of USA Swimming.

What has she found? “Definitely a legacy of fear,” she explains. Her conversations with adults could be pretty discouraging. “Often they’re the scared ones. They’re the reason their kids are not learning, because their parents never taught them. The parents probably didn’t necessarily have access. It’s a generational thing and now it’s having an impact… until we break that cycle.”

“In 2010, with African-American respondents, 69% answered they could not swim at all or had low swimming ability. With White respondents, 42% said they couldn’t swim or had low swimming ability,” Professor Iwin said, reciting results from her second in a series of research studies. Seven years later, trends were encouraging, but also signal that there is a lot more work that needs to be done. The number of African-Americans who couldn’t swim was reduced by 3%, and the numbers for their White counterparts decreased by 6%.

And that brings us back to access and the environment in which instructors teach adults and children to swim. “So, it’s really about eliminating, if we can eliminate all these barriers and make it just as easy as possible (for people), that’s how we’re going to fix the numbers,” Irwin added. 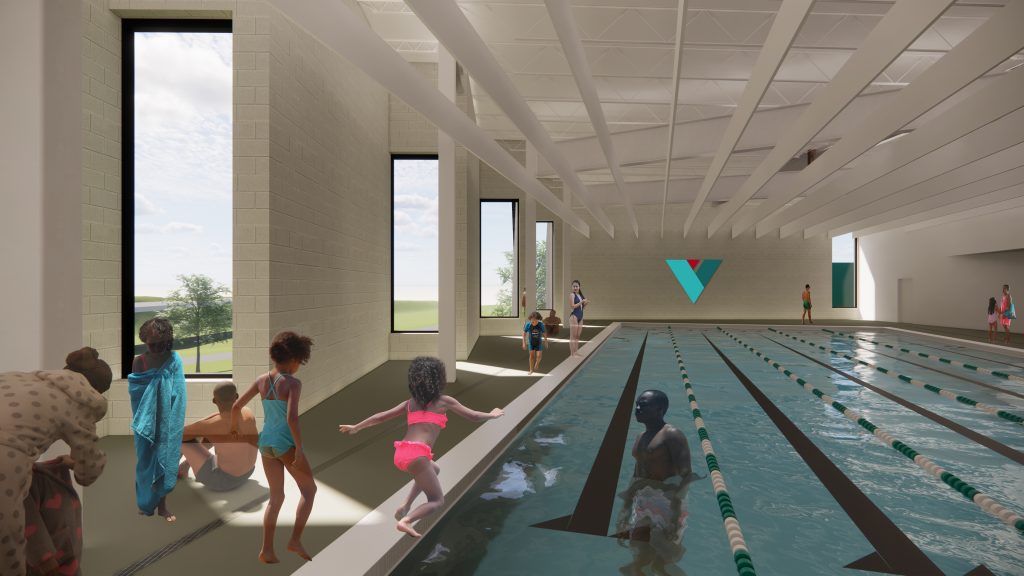 Did you know the 25-yard pool will be warmer than the 50-yard pool? It’ll be more comfortable, it won’t be as deep, and it’ll be a place where swimming will be fun. Professor Irwin and Swim Instructor Advocate Schlaeger dos Santos both strongly believe in the power of a welcoming physical environment and a change in historical attitudes toward water.

“So, your environment affects everything. How you perceive things. How you learn, or don’t learn; how you connect or don’t connect. The pool being the right temperature, everyone having enough space, these are all factors that can come into whether a person is going to learn or be excited about what they’re learning,” Schlaeger dos Santos concluded.

Smaller pool, bigger impact? Offering swim lessons is where V3 will start its work in the Center. Drowning deaths can be prevented. They should be prevented, and the need for access to lessons is immediate and urgent.

But former competitive swimmer, Aaron Gabriel, says V3 isn’t putting itself in an “either-or” scenario. Small packages and big packages both have great value, especially if they’re in the same place, in the form of pools in North Minneapolis.

“What’s really exciting is the total diversity of opportunity that will be available here. You’ll have a facility that can train world-class athletes, and at the same time, introduce infants and youth to their first water safety experience. You’re going to be able to really cover the gamut for the community. That’s hard to accomplish, but really important to accomplish.”